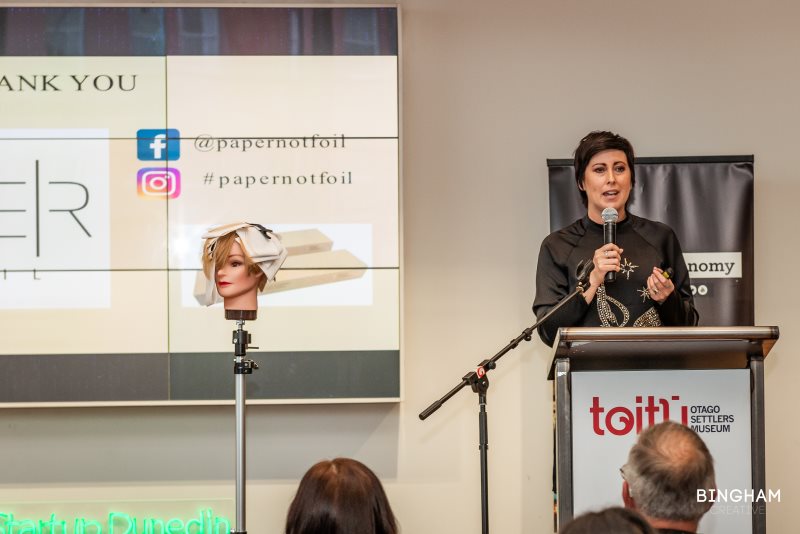 As the inaugural Startup Dunedin Challenger Series looks to wrap up for 2018, three finalists celebrated their progress at a final pitch night in Dunedin last week.

Startup Dunedin, Deloitte, Gallaway Cook Allan, Grow Dunedin Partnership and Enterprise Dunedin launched the Challenger Series earlier this year to unearth and support Dunedin’s best startups. After vetting 71 applicants, three startups were selected to continue in the pilot of the Challenger Series. On Tuesday those startups – Paper Not Foil, The Pet Bistro and Elixir – publicly pitched their businesses at Toitū Otago Settlers Museum.

Paper Not Foil is a sustainable alternative to using tin foil in the hair industry and the first of its kind in the market. While solving a significant waste issue they also cut costs for their clients and provide a better experience for the customer. Through the Challenger Series, Paper Not Foil has secured a distribution agreement in Australia and now caters for over 60 Australasian salons. Founder, Amanda Buckingham, says the Challenger Series enabled her to move “much faster than we could alone.”

Fellow startup, The Pet Bistro, brings pet food back to what animals once foraged for, mixed with vitamins and minerals selected by pet nutritionists and micronutrient specialists. This year they secured angel investment and a NZ based manufacturer.

“The direction and connections we gained through the Challenger Series have given us momentum to grow. The mentoring and help provided is invaluable for a startup – it’s been of huge benefit,” said founder Bex Hill.

The third finalist, Elixir provides specialist healthcare professionals seamless access to patient registration, records, correspondence, and billing, to allow doctors to look after patients quickly and efficiently. Their innovative cloud-based software works across all modern portable devices such as iPads and iPhones. Founder Jack Pivac now has over 20 specialists including Mercy Care East using his software.

Throughout the four-month programme, each startup received weekly one-on-one mentoring from high profile business leaders, strategic support from Deloitte and legal support from Gallaway Cook Allan. They also each received co-working desk space and $15,000 worth of credit to spend towards their startup.

The Challenger Series concludes this November.

Next post Startup on track to streamline construction timesheets