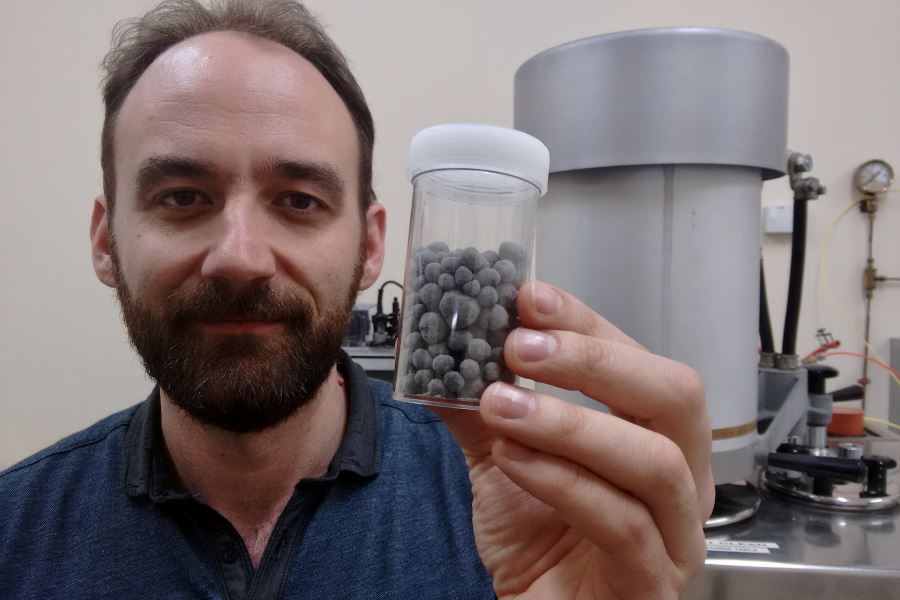 Dr. Vlatko Materic might have given up on his business idea, now known as Hot Lime Labs, if not for a chance visit to a commercial tomato and capsicum greenhouse in Mokai.

Materic is a chemical engineer that spent 10 years developing CO2 capture systems for large power plants. He says that although it’s a solvable problem, no one wanted to pay for it at that scale.

“All of us developers were twiddling our thumbs and waiting for a big demand to come because these are massive units, costing billions of bucks to build the first attempt,” Vlatko explains.

The greenhouse grower told Materic that CO2 is commonly used in high-tech, hydroponic greenhouses where growth conditions are highly optimised because plants use CO2 to produce high yields. However, it’s very important that the CO2 is clean enough to safely contact plants.

Traditionally, greenhouse growers use fossil-based fuels like natural gas or liquid CO2 which often has to be shipped in and can cost a lot.

Shipping in CO2 sounded ‘completely crazy’ to Materic, who had spent his career capturing CO2. He knew there was a better way.

Vlatko was working with limestone, and with it, he could separate CO2 from nearly any source. Wood seemed like the obvious choice to start with because it spent its entire life capturing CO2 from the atmosphere.

“It’s renewable CO2 because it’s taken it from the atmosphere in the last 20 years,” Materic explains, “The last time fossil CO2 was in the atmosphere was 6,000,000 years ago, so it adds to the totals.”

The invention is called ‘Hot Lime’. The patented Hot Lime pellets, or limestone, capture CO2 at high temperatures while biomass, such as wood waste, is burnt.

Clean CO2 can then be released on demand into the greenhouse during the ‘discharge’ cycle. Hot air is blown into the pellet bed prompting the release of clean CO2 for the crops to absorb.

In 2017, Hot Lime Labs made a single pellet of the substance in laboratory conditions, and it captured 50mg of CO2 a day. Today, the pilot system captures 250kg of CO2 per day and has been scaled up 20,000 times to date.

At the end of 2019, Hot Lime Labs completed its first trial, which successfully proved their concept.

Gourmet Mokai has been shipping in refined CO2 from 400km away to meet their needs. This is expensive and fossil-fuel based, so they were looking for a more environmentally friendly, cost effective alternative.

Hot Lime Labs is currently trialing automation to sync with the dynamic greenhouse environment. This trial’s learnings will go into their first commercial unit, which will be at full scale and available for growers in 2021.

The first commercial unit will launch in the same place mid next year and will produce around 2.5 tonnes of CO2 a day, sufficient for a 2-3 hectare greenhouse operation.

Hot Lime Lab’s CO2 capture system can also turn other biomass into clean CO2, but for now, the company wants to stay focused on wood because there’s so much of it, most of which is rotting and releasing CO2 anyway.

“One of the biggest obstacles is not having access to CO2 from wood, so we are hoping to unlock that and help the transition,” says Vlatko.

The South Island is very far from any liquid CO2 source, and Vlatko says that growers there rely on coal because it’s cheap, but with increasing taxes, it’s becoming more difficult.

Wood is a regional resource and Vlatko believes that if greenhouses in the South Island made the switch, it would generate income in the community and reduce reliance on coal and rising Emissions Trading Scheme (ETS) charges, which would future-proof businesses in a changing world.

“We want to encourage as many growers as possible to switch to biomass because it is renewable, and a big part of the carbon footprint comes from that,” says Vlatko.

As more greenhouses adopt their technology, Hot Lime Labs’ could be a catalyst for moving away from fossil fuels by embracing renewable CO2.