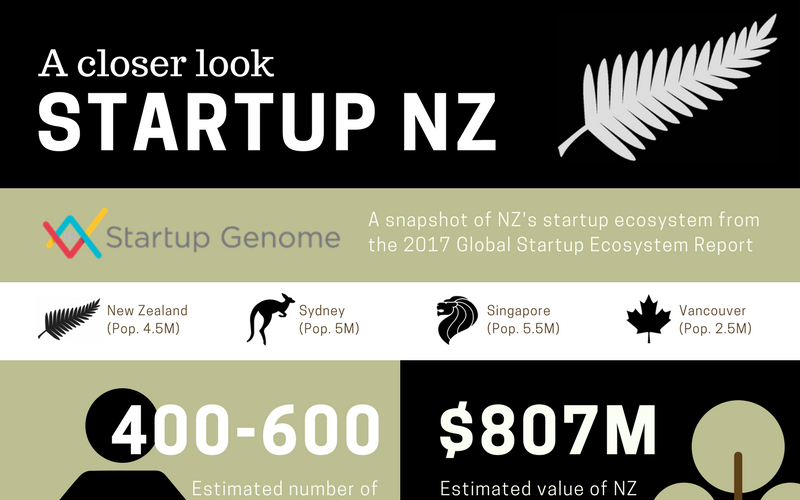 The 2017 Global Startup Ecosystem Report was released earlier this year, benchmarking 45 of the world’s startup ecosystems on a range of metrics.

In addition to ranking the worlds top 20 ‘startup hotspots’ from Silicon Valley (Ranked #1) to Tel Aviv (#5), Shanghai (#8) to Sydney (#17), the report provides some interesting insights into an additional 25 ecosystems, including New Zealand which was included in the report for the first time.

Marcel van den Assum, Chair of the Angel Association of NZ, noted a few highlights for ‘Startup NZ’, the key ones being our relatively high percentage of startups gaining traction with overseas markets, and positive support from the corporate world for New Zealand startups.

While comparing ourselves to ecosystems like New York, London or Beijing who draw on populations of 24M, 14M and 25M respectively is not useful, we wanted to take a closer look to see how we compare to ecosystems drawn from similar size populations.

We summarised the stats that caught our eye, and contrasted them to the metrics from ecosystems in Sydney (population 5M), Singapore (population 5.5M) and Vancouver (population 2.5M) in the following Startup NZ infographic.

New Zealand data for the report was sourced by the Angel Association NZ and carried out with support from NZX, New Zealand Trade and Enterprise, New Zealand Venture Investment Fund, Ministry of Business Innovation and Employment and Callaghan Innovation.

Beyond the numbers, to us the key win for New Zealand is that our inclusion in the Startup Genome data set will provide us with another frame of reference with which we can measure future progress.

To find out more, you can access and analyse the full report for yourself here.