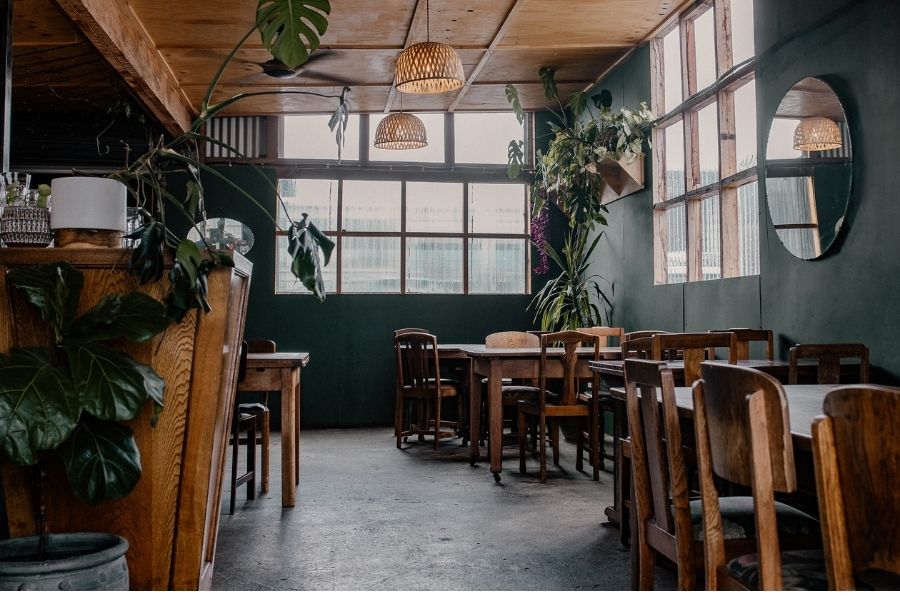 Gatherer Wholefoods is a vegetarian and plant-based whole food cafe and bar in Hokitika.
FacebookTwitterLinkedinPinterestReddit

Starting a food truck in 2012 off the West Coast region of the South Island in a dairy farming town of approximately 200 people is “pretty tricky,” says Alisha McIntosh, owner of Gatherer Wholefoods & Bar. But being adaptable to a changing market has seen their little food truck grow into a coffeehouse in Hari Hari, and now a restaurant, bar and saladaria in Hokitika that opened in January 2020.

The inspiration for Gatherer Wholefoods’ current offering came to McIntosh after she was diagnosed with post-traumatic osteoarthritis in her spine at the age of 35. To address her pain, she decided to try a diet with a plant-rich, whole foods focus.

The difference was both immediate and astounding. “It seemed to work overnight. I could only do a six-hour shift in the past but after cutting meat and dairy from my diet, I found I could do a twelve-hour shift on my feet and not have any pain,” McIntosh states.

While she was serving wild food and game meat when she started, the menu has evolved into predominantly plant-based options with a strong Mexican influence — which lends itself well to plant-based eating. McIntosh notes, “There’s nothing else like this on the West Coast so we wanted to share this kind of food and offer tourists a different option, but we only had about seven weeks of international tourists before the first lockdown hit.”

Like any talented entrepreneur, McIntosh looked for the opportunity in the downturn. With thirteen staff to support, she took the time over lockdown to change how Gatherer Wholefoods operated and set up a restaurant and bar serving natural wines and craft beers alongside a saladaria, which is a takeaway bar with whole food salads, raw vegan slices and other snacks.

In addition to the eateries, she also started running winter whole food workshops to teach people about plant-based cooking skills. They have all sold out. She even did a run of community classes.

McIntosh believes that everyone can benefit from eating more veggies in their diet, even if they still eat meat and dairy.

The menu has changed since lockdown to favour more foods that locals prefer as the plant-based market in a town of 3000 is too niche. Though they aren’t currently completely gluten-free, they are very mindful of their gluten-free options.

Having bootstrapped the business without external investment, McIntosh knows it’s critical to keep growing, moving and expanding. Because “sitting on your laurels is a bit boring,” she is also opening a wine bar that has a wild food focus. Named after her grandmother—Gwendolyn Dorothy Winifred—the wine bar is set to open for the wild food festival in March 2022.

McIntosh states she wouldn’t change anything if she started the business again, as she’s glad they made the changes they did. When asked if anyone can be an entrepreneur, she answers with an unequivocal, “Absolutely.”

“It takes a bit of motivation and faith and you’ve gotta believe in your product. We’re proud to serve our food, we make everything from scratch and don’t take shortcuts. We love introducing people to new things.”

“If a business isn’t working for you, change the approach. I look elsewhere and take inspiration from other chefs because you can’t be too proud to change. It’s also important to have a network of people around you that you can talk to about your business. Don’t be scared to ask for advice.”