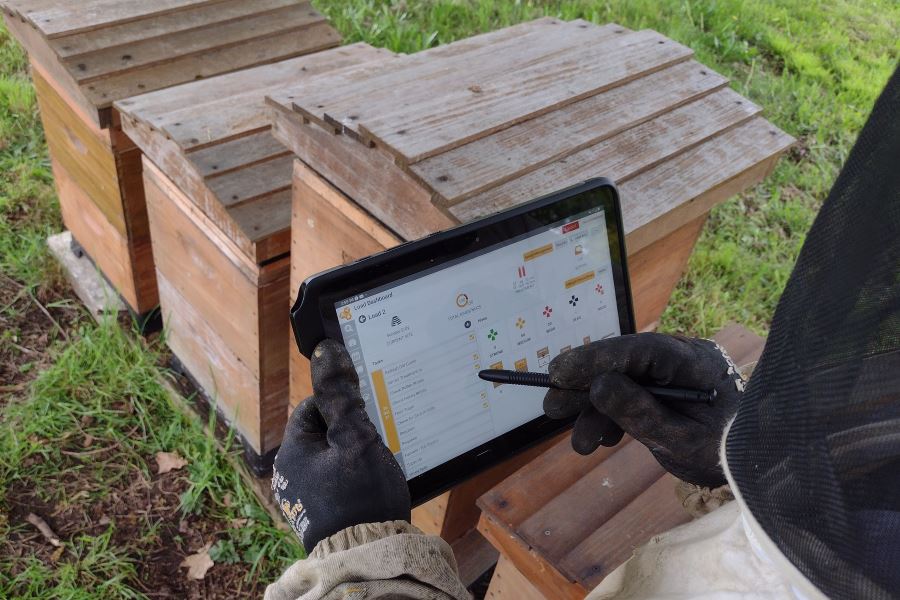 In 2018 there was a surge in thefts of beehives in New Zealand. A few bad actors were stealing significant quantities of beehives, affecting the $330m manuka honey export industry.

NZ beehive management software MyApiary at the time was offering ‘HiveTracker’ devices which could be embedded in a beehive to track it if it was stolen.

After a theft near Tauranga one day, MyApiary founder Darren Bainbridge received a call from his customer who had just been ripped off. Bainbridge and the customer tracked the location of the hijacked hive – which turned out to be a nearby gang pad.

Police raided the compound, the owner got his bees back and – surprisingly – business dried up for MyApiary. “We got a lot of kudos but HiveTracker was so effective, the publicity killed that market [of hive theft victims] off!” Bainbridge told NZ Entrepreneur. “Now we don’t sell it because there are not so many thefts.”

This was one of several pivots MyApiary has made in its business journey – although co-founder and director Carl Vink says he hates the word ‘pivot’ and prefers to say “entrepreneurial agility.”

Whatever we call MyApiary’s adjustments, the business has made itself adaptable enough to handle challenges thrown at it over its five years of operation – with a new business venture just around the corner.

Currently headquartered in Hamilton, MyApiary produces software-as-a-service which optimises how beekeepers operate their businesses including monitoring beehives, harvesting honey, extraction, and recording all the compliance, metrics and business costs and figures.

Bainbridge, surprisingly, knew nothing about apiculture when he dreamed up MyApiary – though he had dreamed, since he was a kid, of running a business.

The co-founders met around a fire at a mutual friend’s party in 2015 back when Bainbridge was working as a product development engineer. “I remember Darren was telling me about his interest in bees and sensor technology, and trying to bring change in an industry which was pretty traditional, pretty classic,” Vink recalls. “As it happens I had left my marketing/comms role and wanted to try a startup or some consulting. It was amazing timing: that was the beginning of six years we’ve worked together.”

“Carl is great with our customers and a way better storyteller, which is why we partnered up,” Bainbridge adds.

The next step in the story was after formulating a business plan and researching the market, the pair engaged Hamilton software developer NetValue to build the MyApiary platform and launched in 2018.

There were a number of problems that MyApiary set out to solve. Firstly the Ministry of Primary Industries (MPI) had tightened up the scientific definition to authenticate New Zealand mānuka honey in 2017, so authentication, tracking and labelling now had higher requirements.

Secondly, beekeepers were struggling with large variances in hive yields but facing consistently high management costs per hive – meaning understanding which apiaries were performing best was crucial to manage profitability but challenging with existing operation techniques.

Lastly, new entrants and employees into the industry were digitally savvy and expecting technology solutions to the various operational aspects of running their businesses. The industry needed the right tools and systems to take advantage of this new environment.

The big picture – and an ongoing challenge – is that honey from mānuka flowers is the highest valued, yet the window during which mānuka-derived honey can be harvested can be as short as a couple of weeks. This means every day that inefficiencies hinder hive management and harvesting can mean lost income.

After the MyApiary software was ready to demonstrate to customers, then came the hard yards – a sales road trip around the country visiting beekeepers. Support arrived quickly after the first sales. There were two rounds of corporate investment from Gallagher and NetValue, plus bootstrapping would keep the organisation lean and mostly debt-free. There were awards in the journey, too, with MyApiary receiving four different innovation awards at Fieldays in 2018 alone.

Apart from letting HiveTracker sales subside, other pivots occurred in the first couple of years, especially in response to MPI’s changes around honey tracing, tracking and labelling and proving provenance. MyApiary added financial reporting to the platform, and MyApiary would in 2021 offer consultancy services for beekeepers.

MyApiary has now been refined into three products focused on hive management, honey identification, and extraction and packaging, all available on subscription models with careful price structuring.

Today, with an estimated 20 percent of registered beehives in NZ using MyApiary’s software, Bainbridge says the company has a solid platform to investigate new horizons. This is why the team are looking at opportunities offshore including increasing their Australian presence, where flowering and harvesting seasons are longer. There is a new market opportunity on the cards also – the details of which are tightly under wraps.

While there are frequent adjustments to meet what the market asks for, one thing that remains ongoing is an intuitive business relationship between Bainbridge and Vink – with Vink so good at telling the company’s story that he is often mistaken for CEO.

“Working together over the years, it’s been like a good marriage,” Vink says. “You need a balance of things in common with things that challenge each other. The recipe for success is meeting a partner who can both support and challenge you. I have so much respect for Darren. It’s a bromance. It’s about appreciating each other.”