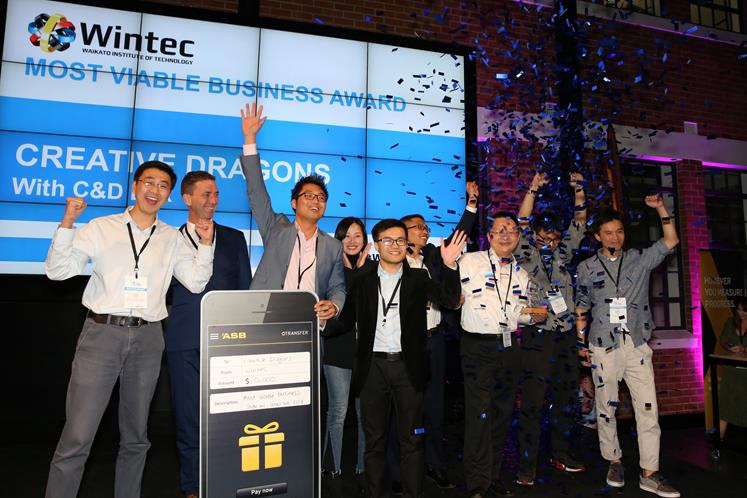 Creative Dragons were winners of the Most Viable Business Award at the 2018 Innes48 Start-Up Competition.

A solution to the issues New Zealand dairy owners are facing took out the Most Viable Business Award at the Soda Inc. Innes48 Start-up Competition at Wintec last night.

The winning team, Creative Dragons traveled from China to compete in the 48-hour business start-up competition.

They wasted no time in identifying and responding to the major issues facing local convenience stores – being robbed, low margins and long hours. Their solution, C&D Box, a cooperative concept, responded to the theme of the weekend ‘better together’ by putting store owners together to benefit from better security through technology, group buying and support.

However, it was a local team, Brown & Down Boys, that stole the show. This family team consisted of father and son, Ted Pogai, and son Christian-Lee Pogai (12 years old) and their family friends Livi Hirawani (15 years old), Adam Williams, Porourangi Gudgeon and Maari Renee Moke.

Brown & Down Boys took out the Peoples’ Choice and the Best Pitch awards with an Airbnb style concept to respond the issues New Zealand marae are facing to maintain their facilities. Their concept, an authentic tourism experience for participating marae won the hearts of the audience and judges alike through its sharp and at times, witty delivery, combined with a great idea designed to create “win-win” partnerships.

Winners of the Most Innovative Idea, team Casually Yes, developed Hook Me Up. This business idea aims to bring the fishing community together through a web-based programme to hook anglers up with boat owners and create a more valuable fishing experience.

Soda Inc. chief executive Erin Wansbrough said the weekend had been a gripping journey for the fifteen teams and everyone involved was ‘better together’ for it.

“By expanding our thinking, we go beyond competition as competing is not the best path to success. Challenging rather than collaborating, can lead to demise.

“The theme ‘better together’ positively influenced the start-up ideas developed by these 15 teams. Their ideas address the issues of a modern world and respond through taking a collaborative, community approach,” she said.

Judge, Roanne Parker announced the six teams that had successfully made it through to the final. She expressed on behalf of the judges that they were impressed with the calibre of each of the business ideas, with many being world class. She did stress however, for all of the teams that it is important for start-ups to aim higher.

“In a small market like New Zealand, the long tail is pretty short, so think bigger, take opportunities, knock on doors. We’re so proud of you, this experience is extraordinary and remember 98 per cent of entrepreneurship is aspiration.”

Bob Stone gave some sage advice at the end of the night for current and future competitors to consider.
“Next year, we’d like to see more women” he said. “Think big, it’s a big world and you can conquer it.”